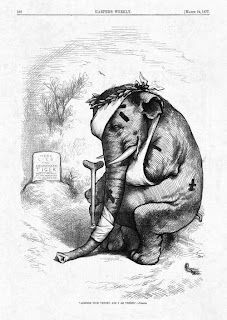 Found your interesting site today. The 1876 election has fascinated me for many years. I've read lots about it, and have come to the conclusion that the Democrats prevented people from voting, while the Republicans threw votes away? Which is the greater sin? Judging purely on the racial split, it would appear that there were not enough black votes to enable Hayes to legitimately carry Florida; therefore, Tilden was entitled to the Presidency, even if denied the electoral votes of LA and SC. 1876 was not the dirtiest presidential election, though -- 2000 was much worse, a clear miscarriage of justice and law.

Joseph Cummins
I am the author of Anything for a Vote: Dirty Tricks, Cheap Shots, and October Surprises in U.S. Presidential History, available now from Quirk Books. This blog, like the book, takes a historical look at dirty politics----and the 2008 Presidential contest is already building up to be one of the dirtiest in history-- showing that, much as we bemoan how contentious our elections have become, dirty presidential contests are as American as apple pie and television.

Get your copy of Anything for a Vote from Amazon.com today!